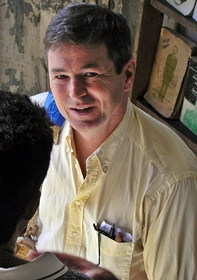 Welcome to the homepage of William Craig, writer, editor and teacher.

His book, Yankee Come Home: On the Road from
San Juan Hill to Guantanamo (Bloomsbury USA) blends history, travel and memoir to explore the United States’ lost legacy in Cuba.

A Minneapolis Star-Tribune Top Ten Critics’ Pick for 2012, Yankee Come Home was praised in the Boston Globe as “a wonder-filled act of excavation and an indictment of our nation’s foreign policy.” A starred review in Kirkus Reviews notes, “The Spanish-American War was the quintessential journalists’ adventure. Craig beats his professional predecessors with his skilled and accessible personal journal and blunt history.”

William Craig is a lecturer in creative writing — fiction and nonfiction — as well as college writing at Dartmouth College.

He founded the Meetinghouse Readings in Canaan, NH, one of the nation’s most successful grassroots public reading series. As the series’ first director, he programmed and emceed its events from 1988 to 2012.

William Craig is represented by The Strothman Agency. He lives in Thetford
Center, Vermont.